SECRET WEAPONS OF THE THIRD REICH 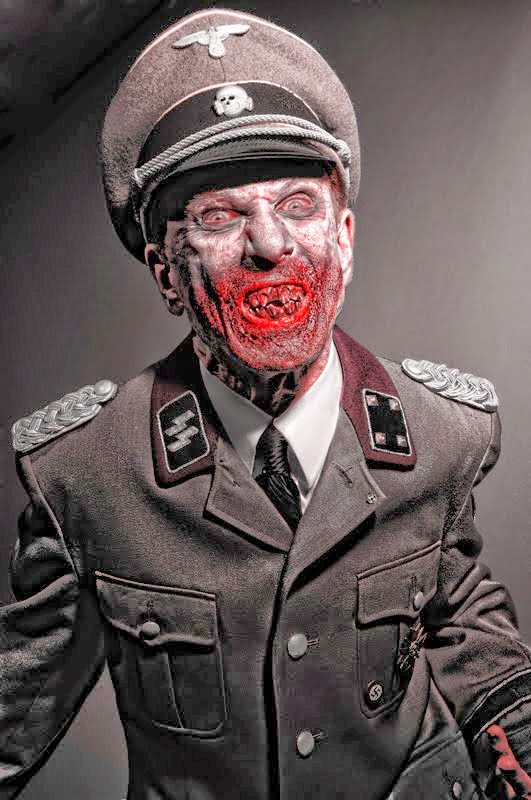 His monstrous bloodlust of living things
provides the energy needed to survive
during waking hours.

Records were deliberately erased. All evidence, discredited. And the existence of the Alpenfestung, the Third Reich´s national redoubt in the Bavarian Alps — where gold and secret weapons were stored —denied and its defense entrusted to elite troops. The general consensus had it that this was World War II´s best hoax; another trick of Joseph Goebbels. All through the years, they acquiesced the conspiracy theorists would hatch their fables. The truth, however, was quite different. In April 1945, the fortress was found by a Russian patrol. Streaks of blood stained the rugged topography. They encountered unthinkable horrors and nights filled with cries, shots, tears, and macabre laughter. Their pleas for aid, tanks, artillery and troops exhausted the radio waves for the ferocity of the Waffen Grenadier Division der SS Rumänische led by the SS-Standartenführer from Transylvania was overwhelming. And by all accounts immune to bullets, swords, and bayonets unless the wound was made right into their heart or were decapitated. Thus, we, the attackers desisted and retreated amidst our many dead, victims of fatal bites. Meanwhile, in the nearby village, we tortured anyone not willing to provide us with information. Finally, a shepherd confessed we were facing a band of fanatical volunteers turned recently into vampires as a result of experiments led by Dr. Mengele himself who administered them their commander´s bite and made them insatiable monsters. Shipments of Jews, gypsies and prisoners of war served as sustenance. When a comrade from Wallachia gave us a remedy, the chaplain proceeded to turn the contents of all deposits and canteens into holy water. Next, he sanctified steel and ammunition and, in a hurry, forged crucifixes and other pious symbols. The assault was brutal. The orders were to take as many prisoners as possible. Ever since, I have been in command of a phantom division of the Red Army which has been ignored by all the organization charts. And because our own scientists conducted an abundance of experiments, we have been waiting now for over forty years, ready to extinguish this decadent capitalism, anxious to fill ourselves with their bourgeois blood.