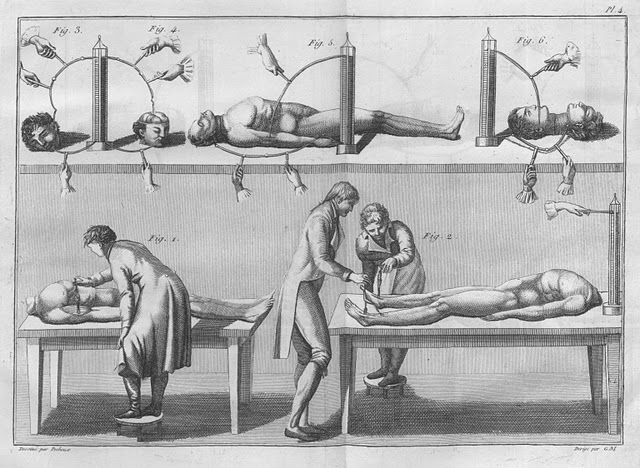 For what seemed an immensely long time I gazed
without knowing, even without wishing to know,
what it was that confronted me.

Aldous Houxley – The doors of perception

Miles Burford, MD was the rising star of the London Galvanic Hospital. Once, as a fellow, he attended the experiments of Giovanni Aldini in which galvanic current was applied to the corpse of a criminal. On that occasion, the dead man moved his limbs and his body shook up as if he was breathing. After such promising outcome, the young Miles fell into a state of madness and decided to follow a definitive course of action, that is, with the help of electricity, he would defeat death. It was from that moment on that he devoted his career to find the dose capable to return the motility of the heart. Despite his enthusiasm, years went by and there were many failures. Mainly, because the complexity of the process demanding more precise appliances. And these were expensive. However, his obsession gave birth to a treatment that would finance the whole project: the use of galvanism to restore all the exercises of a man. After all, that was also a muscle. Success or mere hope, the good news soon toured all the Gentlemen’s clubs. Aware of such outstanding novelty, the eminent Sir Archibald Gladstone -who was none other than King George’s personal physician- came to visit his young colleague. Discreetly, they appointed a date and time. The young doctor declined all payment but did accept his designation as surgeon of the Royal House. The day arrived and the patient underwent the necessary preparations. His limping muscle was wrapped in copper wire and the lever pulled down. A sizzle ran through the wires. After a moment’s hesitation, the old bulldog smiled under his big mustaches as he watched the amazing signs of resurrection. Truly, the pain was considerable but the egregious director of the Royal College of Surgeons could not be happier with the virile cramp he wore down there. And so, imperative, he demanded an extra dose. Alas! It was not a good decision. His jaws began to tremble and all his nerves convulsed horribly. We do not know which happened first, the scream or the explosion but his manhood blasted like a rotten fruit spattering black blood as high as the ceiling. The smell of burnt meat was repulsive. Then, with a macabre hiss, the viscera began to slide through the smoky crater that blurred his crotch and Sir Archibald died with a gesture of disbelief. Upon learning of the tragedy, His Majesty ordered to conceal the misfortune and impose on Dr. Burford an immediate exile in India.

(*) This short story has been published in #157 of Revista miNatura, dossier Splatterpunk and it is a prequel of "The city of silence".