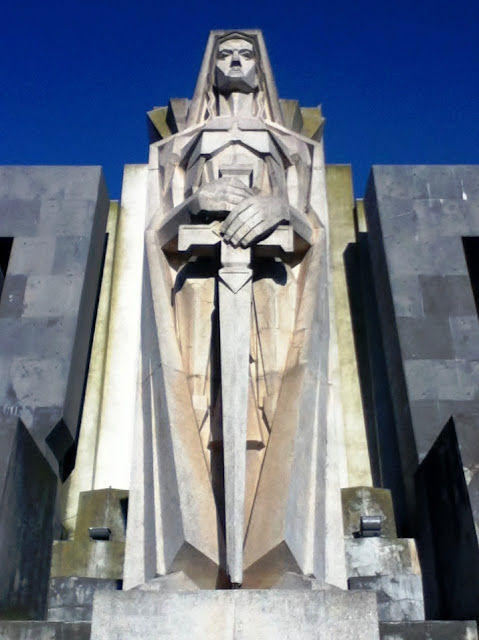 
How art thou fallen from heaven,
O you morning star, son of the dawn!
How art thou cut down to the ground,
which didst weaken the nations!
ISAIAH 14:12


HISTORY HAS NOT been sufficiently stringent with the bloody adventures of the "Society for Research and Training in German Ancestral Heritage", the scientific unit created to rescue the origins of the Aryan race. Its members, enthusiastic individuals of oscillating mental stability and lacked professionalism, devoted their efforts to conduct extravagant experiments, quite often fatal ones. Some chronicles wryly evoke failed expeditions to Tibet and the North African desert.

In this instance, an Afrika Korps officer thought he recognized a runic alphabet carved in stone. The leaders of the Ahnenerbe stealthy sent over a contingent of linguists. After reviewing the inscriptions, they presaged a very important finding. It certainly was a huge discovery albeit most abnormal for as it turned out. From under many tons of sand emerged a colossal statue instead of the prophesied Viking city. The human-shaped giant showed angular features, a hooded head, an elaborately-carved breastplate and hands that rested on the hilt of the sword. All of these features suggested a mythical warrior of unknown lineage. However, the obsequious chieftains of the NSDAP Party rushed to authenticate the image as that of an ancient Germanic god. The frenzy that followed was advanced and accredited by the absence of any analogy with the Egyptian canons, but especially for its condition as a winged-being. Strictly speaking, a mono-winged creature; the other appendage appeared to have been sliced off at the base and not by the industrious course of ages but by the sculptor´s own chisel. As it stood, the effigy´s nobility was somewhat altered by this detail which if deliberate was no less disturbing.

The war was unfavorable. It was said a British blast buried the whole excavation. Others affirmed it was blown up by the Nazis themselves enraged after hearing that scrupulous readings concluded the cuneiform characters were a form of earliest Hebrew. They were so angered by the revelation as well as by the example of degenerate art in their hands, thus no one paid attention to the fatal warning hidden at the foot of the statue: "Behold Michael, defeated commander of heavenly militia. Generations will profess otherwise, but I, Shaytan, who was created from smokeless fire, killed him once and forever. "