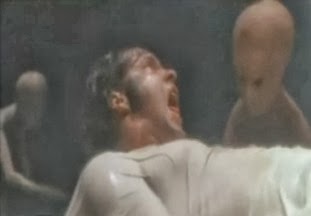 The memory was always there but as letters of an unknown language. It seemed like a glimmer, a brief light at sea, a delayed possession that only filled me with fear. If I even considered of having suffered child molestation and that the veil of my conscience, victorious before, finally surrendered to the outrage. Controllable for years, this evocation of nothing became a frantic obsession which mostly took me by assault in the shower. The trickling water made me sick. This suspicion of an unprecedented horror began to stab my sanity and even against my convictions, I sought after psychiatric care. The sessions were as much useless as the brain scans. It was no surprised because I am in good shape since I was eight years old. Not even a miserable cold. But for some strange reason, plunge into the depths of my mind triggered the dreaded. A caravan of images sunk me into an exhausting madness: bodies lying on stretchers, bubbling green liquid burring their skin; monitors with unrecognizable symbols. And gods with serrated teeth were conferring with humans. Because they were gods and they were angry, very angry. Men treated them with reverence and submission. All of them argued with urgency. Final decisions were made. And there was a vortex of light, and the purr of an invisible motor, and the vertigo of falling faster, and a drowning, and nausea. And there was again the fatal silence.

A tin basin falls to the floor and the amplified echo put me out of doze. There were no gods but men with yellow rubber suits and diving masks. I hear them talking behind the static but I cannot restore the sense of their sayings, only single words like microbe from the deep space; catastrophic infection; denounce of Star Treats, suspension of all joint actions, erasing of memory. Someone warned I was unexpected awake and rush me a sedative. I immerse in clouds of bliss and oblivion, until the swirling water in my bathtub opens the door more feared meanwhile the radio announces the declassification of secret documents. The government insists: The Area 51 is a simple base for spy planes. No, it is not. I know it. Now I remember everything.

This short story was published in # 132 of Revista digital miNatura devoted to "Area 51". We wish to express our thanks to the writer and translator Violeta Balian who helped with the fine tunning.
Publicado por Pablo M. Burkett en 11:00