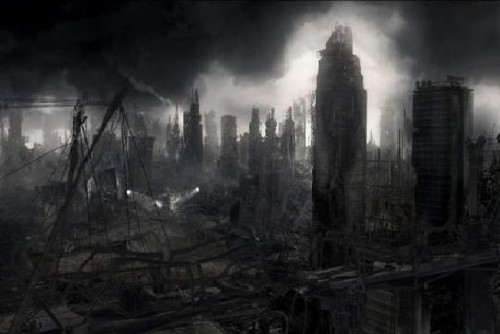 HOMESICKNESS
Everything tires with time and starts to seek some opposition, to save it from itself.
Clive Barker- The Hellbound Heart
Those who were interested in the past do not agree with the causes and records kept are not entirely reliable. It is very likely that faced with the imminence of the climate holocaust, the AIs took control and, with indifferent efficiency, arranged what was necessary to eradicate the cause of the planetary disaster. And those who did not die from Marburg's hemorrhagic fever perished for the Ebola virus, anthrax or other lethal bacteria. A few managed to shelter in underground quarters, but by the time an electromagnetic pulse was fired to block the destructive AIs, the plague exterminated more than eighty percent of the population. The Earth was a large cemetery. We do not know what ended before: if food or hope, but in the facilities below the surface, there were riots and bloodshed. Finally, the fittest approached the few available motherships and set sail to Europe, the moon of Jupiter that had been terraforming for future colonization. It was not easy at all to settle in a still inhospitable atmosphere, but after several decades, a state of prosperity was reached as similar as they have in the lost paradise. However, homesick never left them, and the expatriates called themselves Earthlings. That longing stimulated the desire of returning. Long-range sensors swept the Earth's surface. If viruses do not have much survival outside the body, bacteria can remain for centuries. They organized the first trip after thorough negative examinations. There would be time to return, but for now, the expeditions would only be recreational. Between the military and tourists, they were twenty-five who stepped on the mother planet, and although the sky was no longer blue, several cried of happiness. Upon their return, after a rigorous quarantine, they were released to share the experience. It was not the only thing to share. Maybe it was due to insufficient analysis, defective sensors, or an unpredictable evolution of the bacteria, but after a few days, they were all dead. I write this chronicle while I watch the corpses pile up, bursting with purulent buboes. I have a fever myself.