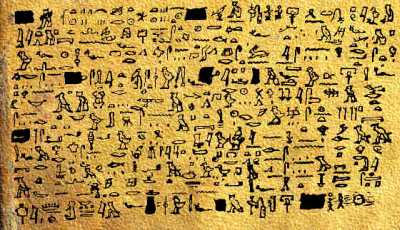 As they that approve a private opinion call it opinion, but they that mislike it, heresy: and yet heresy signifies no more than a private opinion, but has only a greater tincture of choler.
Thomas Hobbes- Leviathan, Capítulo XI
The uncanny suicide of Professor Engel von Himmel caught me off guard. He and my father had been comrades at the Egyptian wing of the Vatican Museum. Later on he became my mentor. I owe him everything that I am. A few weeks ago, the mailman delivered a posthumous letter. In it, the late professor warned me about a massive conspiracy. He also regretted getting me involved. I wish I had time to deny the much talked about "Curse of the Pharaohs" but gunmen are already after me. And the Zeitschrift fur Sprache und Altertumskunde Ägyptischen has refused to publish this fabulous discovery, arguing that my dear teacher was suffering from senile delirium. Hence, I only have miNatura’s courage to denounce this renewed attempt to falsify History. The letter was full of documents. Most important of all, a papyrus of no more than 20 cm in length, very poorly preserved and broken parts caused by the passing of time. Professor von Himmel acquired the papyrus from the heirs of a former Afrika Korps officer, who had sold it for a few coins.
As I read it, I felt an existential dizziness, a transparent certainty. There, shining before me was the testimony of an alien irruption in human evolution. I do not want to contaminate such exquisite translation therefore, with fear but as well as hope, I faithfully transcribe the words of this martyr of the truth. The papyrus says: "In [...] Pharaoh summoned Dyehuthi, the scribe, to witness the miracle which came from the skies. A burning disc landed in a rain of fire and the King’s Army could do nothing [...]. Visitors approached to the Lord of the Two Lands and they were tall [...] skulls as giant eggs. Their paladin had a cane that looked like a blue fire serpent. They came from [...] and they claimed the gold in the belly of the Earth to restore [...] the star without heat in order to be able to breathe again. In return, they would give us a great gift to master the elements, to know the primordial substance and its transmutations, transform metals [...] the health of bodies and the last journey of souls. They also asked for women to make home with them and breed a race of Titans who would return to their world to restore the reign of the light which has no end".

(Editor's Note: The e-mail here transcript was truncated and the author has not been heard since).
© Pablo Martínez Burkett, 2012
Publicado por Pablo M. Burkett en 11:20