OUR LAST MAN ON THE MOON 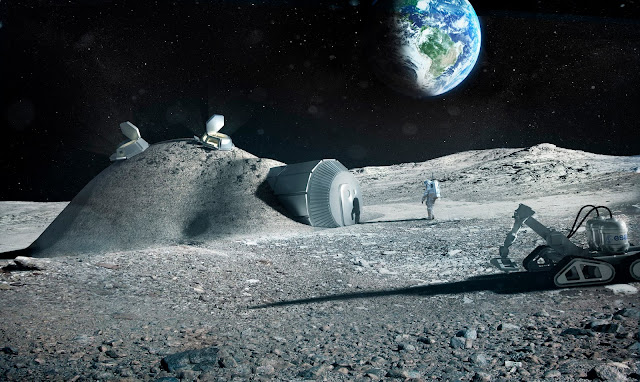 OUR LAST MAN ON THE MOON
But my soul— the soul I can produce— will survive the death of the Sun and the freezing of the Earth.
Stanislaw Lem – The star diaries
First, from 2030 to 2040, burst the mini ice age. And predictions were not enough to foresee the effects of solar activity at a half of its power. Next, the biologists announced the disappearance of the vertebrate species at a rate comparable to the extinction of the dinosaurs. The news was calamitous,however the fighting bands did not surrender to the War of Elements and everything went from bad to worse. And the predators arrived from outer space. They were beings that originated from somewhere in the galaxy where cold and immorality reign supreme while they scavenge decaying worlds. They attacked without warning and our drones were no match against the Flying Fortresses.  Soon, we were vanquished. And after a short and barbaric takeover, the mother ships arrived to swallow up the crowds. Rumors, full of optimism spoke of slavery in their frozen planet while other sources whispered the ominous words: vital fuel. And with more urgency than hope, an organized resistance was put into place. In the meantime, a suicide patrol reached one of the few active satellites’ orbit and managed to communicate with Moonraker Base. A neural network of defense, it was never fully operational; that is, another billionaire failure originally intended to prevent a new, nuclear conflagration. Except now we would use it to rescue us. Moonraker had always been in charge of Colonel Scarlett Venom, a privileged mind in Astrophysics and Strategy whose image was not uncommon in TV commercials until all contact was lost. Fifty years ago Venom successfully organized human life under the lunar surface. And for me to have been appointed as liaison by the Resistance was an enormous responsibility that did not diminish the pride I felt. I saw him, and he spoke to me. He does not look at all like the old postcards but that it is not important as I am certain everything is going to be alright. Damn you ugly gibbous things: the solar system belongs to us, Earthlings! We have deciphered the sequence of its fractal shields.  And I cannot wait any longer to activate the electromagnetic pulse and fry the albino invaders.  Colonel Venom will give the orders at the precise moment. Right now, he is just a living brain imprisoned in a machine but I will not say a word because restoration will only come from our last man on the moon.


© Pablo Martínez Burkett, 2015
(*) This short story has been published in #145 of Revista digital miNatura, dossier devoted to the Moon