THE AGE OF DARKNESS 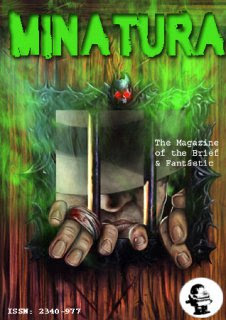 THE AGE OF DARKNESS
In beloved memory of Violeta Balián

The Stars, Sun, Moon all shrink away. A desert vast without a bound. And nothing left to eat or drink. And a dark desert all around.
William Blake - The mental traveler
This is the story of our known world, our three islands: The First, the Second and the Third one, the Continent-Island. We were always alone, uncontaminated, protected by the Sea of Storms, which abysses itself at a moon of navigation far. It was never known of a ship that survived the waterspouts and other furies darkening our horizon. However, the autumn mist brought an armada of black vessels that puked a horde of monsters embroidered in iron spikes. The wind flapped their flags which carried a horned serpent as badge. The ancient legends were true: the barbarians from the other side did exist.  And they were methodical with the invasion as well as merciless with the extermination. Our armies, veterans of parades and anniversaries, looked like paper figurines. But what terrified us the most was that the conquerors perpetrated the carnage in the most perfect silence. Later, we learned they had their tongues cut. Before winter, the insidious Sukur-Lamak proclaimed himself the satrap of the Third Island and married Urka, the widowed queen. The streets flowered with impaled bodies and all types of tortures. There was no woman or little girl left without being raped.  Men, young and old were enslaved and used in the iron oxide mines. Fruits withered, and crops rotted. In time, history books called this sinister time, "The Age of Darkness". I am Irukamis, the royal magician and I must admit none of my spells worked. I had to find the way to set my people free. There is no worse tragedy than living without hope. I read the old treaties of war and realized that you do not win not all victories on the battlefield. That is how I crafted the legend of a sword born in a cursed forge, made with the dark metal of a meteorite and the fire of volcanoes, while the necromancers sang their sad songs and lamentations. And soon, in fairs and roads peasants began to whisper the triumphs of "The russet one," so called by the bloodbath that left in its path. It was time to create the Titan able to rise such a legendary sword. Among the oppressed, the name of Askalion of Tamaria became both a psalm and a blessing. Then, restoration began. But that is another story.
© Pablo Martínez Burkett, 2018
(*) This short story has been published in #161 of Revista miNatura, issue devoted to the Universe of Robert E. Howard .