A STRANGE CASE OF DELUSION IN LAGUNA EPECUEN 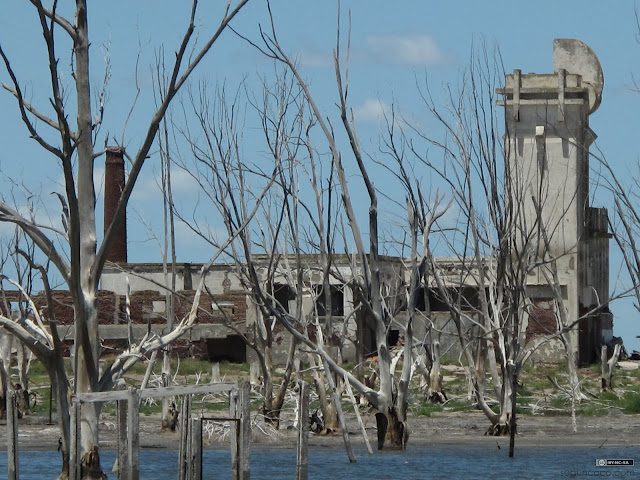 A STRANGE CASE OF DELUSION IN LAGUNA EPECUEN (*)

That is not dead which can eternal lie,
And with strange aeons even death may die.


Thirty years ago, a wet, south-easterly wind brought down the embankment. The governor decided to evacuate the population and blow up the retaining wall. And, as a result, the lagoon devoured the small town of Epecuén. The wind’s fury did not even respect the cemetery; there were coffins floating in the streets. Then, as soon as the waters receded, and where the land was cracked and parched, and the trees stood like claws, emerged a ghost town. Hariberth Webber, MD arrived not long after and settled in the abandoned hospital. He spoke Spanish with difficulty. His very presence was scary but as he took care of the sick, no one paid much attention to the foreigner. I became his nurse; out of boredom. It was not uncommon for him to get drunk and boast about the nature of his experiments which, according to him, would astonish all of mankind. Other times, he cursed the fall of the Berlin Wall for postponing his scientific triumph. I noticed my condescension exasperated him.  One night, he dragged me into the last wing, the one that bordered the cemetery and where an unexpected horror overtook me. Inside a huge aquarium, I could see a horde of gelatinous, cylindrical beings flapping like flags. They were lampreys, he said. Their horrible sucker- mouths, riddled with serrated teeth, clung on to something that was not readily distinguishable. I got closer and saw them fixed on a corpse and feeding frantically off it. Herr Doktor explained that the salty lagoon had preserved these human bodies in unbelievable freshness. And while the lampreys took care of the meager rot, optimal conditions were being set for the administering of that green, phosphorescent liquid bubbling in a distiller. It was the formula to reanimate dead bodies and restore rational functions. I was there to witness the event, he added. He then pressed a button; the lampreys received a shock and dropped the corpse. Another touch of a button and a drainage system quickly emptied the infected tank. Next he filled a syringe and started injecting small doses of the green liquid. At the peak of this atrocity, the body began to move, slowly at first and then with violent contortions. The poor soul opened his eyes and raised a hand. I guessed I passed out. When I regained consciousness, there was nothing and no one around me; I was now in a madhouse, they said. Only, I did not care anymore.

(*) This short story has been published in #142 of Revista Digital miNatura issued devoted to Weird Tales.