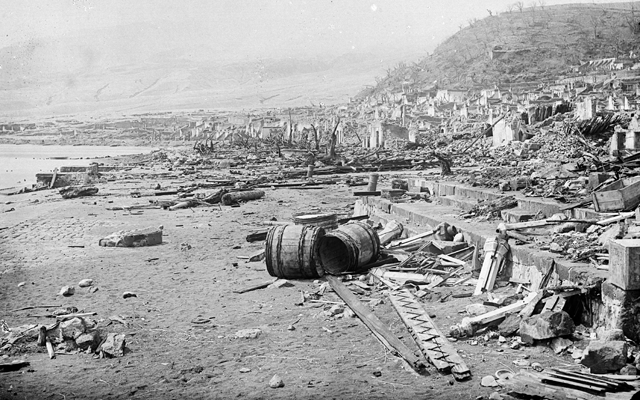 The unpleasant thing, which offends my modesty,
is that fundamentally I am every name in history

Letter from Nietzsche to Jacob Burckardt


Newspapers portrayed the catastrophe of Saint Pierre, capital of Martinique. More than thirty thousand people burned by a volcano’s rage. Such slaughter had me desolated. I thought taking some air would be a clever idea, even if it was to investigate a death. A case of suicide, something very common in the Healthful-House, a hospice in front of the bay. The deceased was a Frenchman who before hanging himself wrote on the walls: "Ce ne fut pas le volcan. Ce fut le fulgurateur". According to his brief clinical history, he was a severe schizophrenic who two days ago went into an unusual state of alteration with persecutory hallucinations. I started to investigate. Although the staff showed no desire to collaborate I managed to discover that the unfortunate man had a huge outburst when he learned about of the island’s tragedy from a guard. I sat in the garden, and I lighted a cigarette trying to tie the loose ends. One of the inmates approached me for tobacco. Looking at the sky, he repeated several times that the dead man was a friend of a patient whom a spy male nurse and some pirates had kidnapped in a secret place in the Caribbean. As soon as I wanted to find out a bit more, he shut up and began to hum. They were the words of a madman, but just in case, I asked for the files. It took some effort, but I managed to find the medical records of some Thomas Roch, an engineer, who lost his sanity when he did not find a buyer for "The Roch's Fulgurator," a so-called weapon of mass destruction capable of destroying ten kilometers around. Although they say that in Europe there is a doctor Freud who unveiled the unconscious, over here they still do not cure anyone. There was, however, that brief annotation in Roch’s records which discharged him. Something very abnormal. And much weirder, it turned out when two gorillas in white approached me and claimed I had missed my electro-shock session. Obviously, they thought I was someone else, not the sheriff of New Bern who is here to investigate a suicide and now, a missing person and a possible criminal conspiracy to blow up the island. In any case, I could not make them understand the situation, so I grabbed a piece of paper, and before I got my brains fried I wrote for help: Please, send someone to rescue me.


(*) This short story was published in #158 of Revista miNatura, dossier "Jules Verne".